I was recently reading another “coach” bio on the interwebs and it got me thinking a few things. The first was, “Dang. Everyone is a coach these days!” That’s a whole different story. What I was really thinking about was training philosophy. This young man had about 20 names listed as his coaching influences and for reasons we’ll discuss, puzzled/worried me. Why? Well, the thing is, the first response to this was, “Why so many?” Was he just name dropping to look smart? Maybe. But maybe there was more to it than that. I think there may have also been a big lack of understanding in what these coaches really stood for in their own coaching philosophies. For one, you could really divide the group he listed into three groups. The first group, well ok, person, would have been Arthur Lydiard. He is without a doubt the man with the plan when it comes to training. The second group would be the pupils of Mr. Lydiard. This was the majority of the names mentioned. The last group was smaller, but consisted of the non Lydiard lineage.

So, the second group I totally get. It’s the same ingredients, just different mixtures. Everyone has their own interpretation about what Lydiard would do in present day. I completely understand the slight differences. On a side note, I have been reading a lot of notes and articles lately involving many of these other good coaches. I found it funny that a lot of what they did differently wasn’t out of differences in thought, but rather, out of necessity. Some of it was due to climate or facilities. Some of it was geographical. These coaches did what they could to mimic the original based on what they had to work with!

What I don’t understand is how the third group of coaches played into this. You have on your left, one school of thought. On the other you have a completely opposite school of thought and now you are somehow supposed to integrate components from both. To me, it seems very counterproductive. I am all for being adaptive and growing as we find new theories, but you can’t play politician and flip sides when your crowd changes. Stick with what you believe and if you don’t know what to believe, find something!

Ok, so enough soap boxing ( I really wasn’t attempting a political theme here…) and let’s get to what matters with us! What is the Hanson Philosophy?

That’s a great question and until I began working on the book, I didn’t have an exact answer. This isn’t going to be a short answer, but it will be thorough. Overall, everything that involves Kevin and Keith Hanson (the elite distance project and the schedules for the masses) is Lydiard based in thought. So, let’s go over what exactly is the Lydiard thought process?

Lydiard in a nutshell: 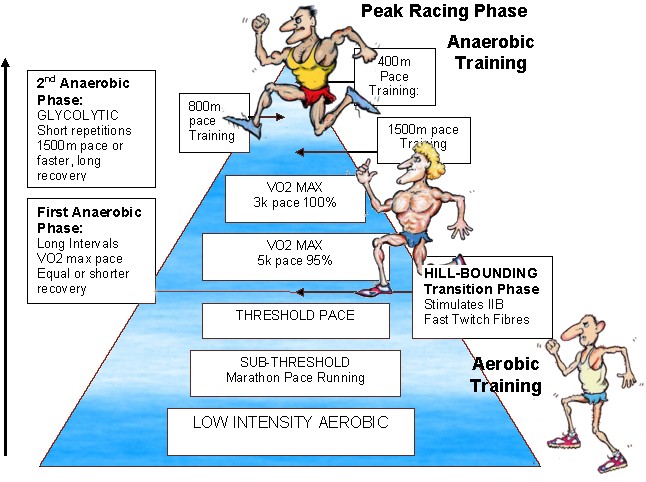 Simple right? Don’t let it trick you. All it’s saying is that you the base of your training is easy aerobic running. After you build that you can move to the next level, then the next level, all the way until you are close to you your goal race. Each step is smaller in size, but higher in intensity. All year, you do things like hills and form drills.

Now, if you read in depth about Lydiard, what you find is interesting. This is the pyramid that is the staple for his training- but he wrote that you “climbed the ladder” to the point where you were racing. So, an 800/1500 meter specialist would climb that ladder all the way to the top. However, as Lydiard indicated that for a marathon runner, he wouldn’t get past the 5k intervals.

Where it gets complicated for marathon runners, to me anyway, is that Lydiard indicates two things what would leave room for discussion. 1) That training needs to be balanced. This means that all aspects of training are somehow incorporated into a training program. 2) That he wants the most race specific work to be done near the time of the goal race. However, in his writings he has the last few weeks of a marathoners program doing intervals at 10k and sometimes 5k pace. To me, the last thing I really want to do is to be on the track doing intervals two weeks before my marathon. This is where I can see some room for negotiation.By no means am I claiming to be smarter than Mr. Lydiard, only that I have trained for a few marathons and know what my body likes…

It is that second point where you will see the biggest discrepancy in the classic Hanson Marathon schedules and the Lydiard philosophy. In the classic schedules you will see the speed more in the beginning of the program. Why? It’s simple- the runner has a balance in training and no aspect is left out. Also, the last several weeks are completely devoted to marathon specific running. Some argue that the speed lowers the pH in the blood and this hurts aerobic development. However, the speed in the beginning acocunts for roughly 7% of the total weekly volume. 93% of the running over the rest of the week is marathon pace, or slower. From a practical standpoint, we don’t care if the intervals are truly at their best 5k or 10k times. If they are slower than their true 5/10k potential, that is fine. The work they do would then be closer to lactate threshold and still provide a great transition to the marathon specific work later in the segment!

Remember, the classic schedules are designed to fill a wide spectrum of runners and what is offered individually may be different. The book has an entire chapter devoted to the marathon philosophy that Kevin and Keith have developed over the years to fit those runners. For members, I am working on a complete detailed explanation of the training philosophies- so watch out for updates!

Beginning to understand the hanson philosophy