As usual, it’s my athletes emails or questions posted to my Facebook coaching page that spur blog posts. As I right this, I’m getting a lot of “Should I be adjusting for the heat?” type of questions. And the simple answer is “Yes.” Thanks for reading, have a wonderful day… No, no no, of course there is more to the story than that! Yes, we should probably adjust, but how much? Will we adapt? Is heat a natural performance enhancing drug? There is certainly a fair number of issues we should look at.

First, what happens to us when we first start exercising in the heat? Unfortunately, I had a heck of time finding a definition of when we are actually talking about running in the heat. I mean, is it heat index or a temperature? If so, at what point is it considered hot? Anyway,

Can I adapt to heat and humidity? 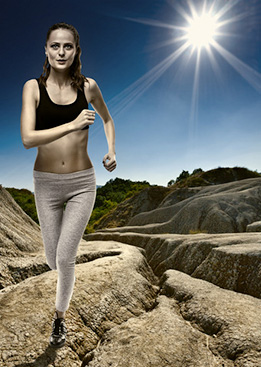 The good news is that you most certainly can. Over time, if you acclimate to the heat and humidity, the following adaptations will occur:

The end result is an increase in performance in heat/humidity (and maybe cool weather too!)

How long does it take to adapt?

If you can accumulate 90-100 minutes of exercise daily in a hot environment, then you’ll see the vast majority of adaptations in 10 to 14 days! The key is the time you must spend daily at an intensity of greater than 50% VO2max. The intensity isn’t going to be an issue, as you could reach that with a light jog. However, if you aren’t getting 90-100 minutes in, then I suspect that the time frame will be extended out beyond the the 14 days.

Quick Tips to use while adapting:

How much does heat/humidity effect performance? 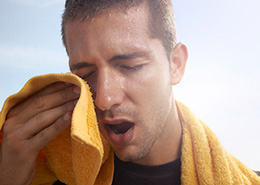 I’ve seen a number of different charts and calculators that show a variance of how much to adjust. The biggest problem with all of these is that there is often a lot of generality in the recommendations. For instance, should an elite marathoner adjust as much as a 4 hour marathoner? Your ability level, acclimation level, and fitness level are all ultimately going to be a determining factor.

The warmer it is, the more you’ll have to adjust, as well. Here’s some general recommendations that I have seen:

These are very general guidelines and I would use these as a baseline. It’s easier to be able to pick the pace up later than it is to recover from heat stroke! The other thing to remember, is that as you become more fit and become acclimated, these numbers will probably change. So, when training, it’s a good recommendation to use these as a guide, but also to use effort secondary measurement. For me, the key is not to get hung up on slow splits or average paces. Getting the effort in is what is key. Think about the folks at altitude and how they have to adjust their pacing. Does it mean that they are going to perform less than their ability? No, it means they are putting the right effort in for their environment.

Once again, questions arise about training and heat. The easiest way to look at is based on performance. I recently came across some research (PDF Here) that will shed a little more light on the matter. Over 10 years these researchers collected data on all the finishers of 6 major marathons (Berlin, Boston, Chicago, London, NYC, and the Paris marathons) which resulted in roughly 1.8 million finishers. That’s not a bad subject pool! They looked at environmental considerations like temperature, humidity, due point, and air pollution. As we could probably predict, people slowed down as it got warmer. Here’s a great look at the sum of the research:

The nice component to this research is that it’s broken down by gender and expected finish. The data itself probably isn’t revolutionary, but it does show what effect you personally may have. Our problem still remains what effect this will have on our training paces. That data is still unclear. The easy thing to do would be to take the data above and simply plug in our paces given the percent category we fall into. However, I don’t know if it’s that easy. Coach Mark Hadley has a nice blog about the concept (HERE). And while the data certainly seems feasible, I just don’t know if it’s a number he made up or what the reasoning is behind it. He essentially says that for every degree of 60, you should add about 0.1% to 0.15% to whatever training pace you are attempting. Like I said, that certainly sounds reasonable, I just don’t know where that data is coming from. Personally, I feel like easy runs will be less effected by heat, especially runs under 60 minutes. Long runs and tempo runs will be the most effected. Speed work will probably be less effected while strength workouts will probably be the most difficult to predict what will happen.

My advice for training would be what we suggested in the original article, but then go by effort. This is where wearing a GPS or a heart rate monitor truly becomes your training tool and not the dictator of your training. Learn what efforts feel like. Ideally, as you acclimate, the closer pace matches effort. If your end goal is months away, then don’t get discouraged. Many of you see the slow times and get too worried about something that isn’t truly indicative of what your fitness level is, or going to be. If your race is coming up and going to be in hot weather, then take it as a great tool for learning how your body is going to react in the conditions. A PR might be not be in the cards, but you can still have a great race and beat all the ill prepared runners. Not to mention, be safer! That’s it for now. In another post we can discuss the strategies for racing in adverse conditions.

Earlier this year, I did a podcast interview with a guy who pretty much blasted me because I don’t prescribe workouts based on heart rate.…