For my friends who don’t really train through a long stretch of snow, wind, cold, and poor footing for more than a few days, then you may not find much use of this blog. For the rest of you, you are probably like me and wonder if you are literally just spinning your wheels. The end result can be an unwarranted lack of confidence as you head into a winter or early spring marathon. Today, I want to discuss what common concerns I get and then provide you a case study as to why we don’t need to throw our original goals out the window. 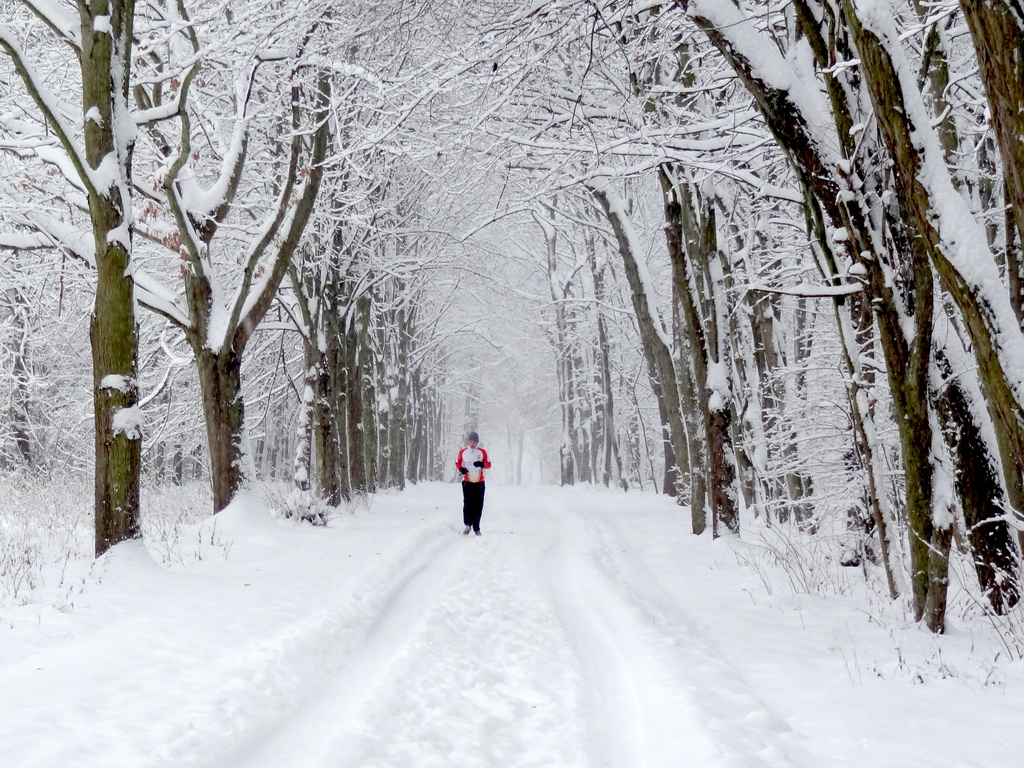 There’s a few questions and concerns I get this time of year, but the biggest reflect around a sudden loss of fitness (or apparent) because of familiar loops being slower than they were in the fall. For instance, this morning we ran a loop that we run throughout the year. On a normal easy run, I will run 6:30-7:00 minute miles. Last night we got a little dusting of snow which made the sidewalks and side roads a mess. The pace of today’s run was about 7:30 per mile, but it felt like I worked harder than my 18 mile long run yesterday (that was 6:30/mile average). What gives? Over one day, I assume that most people chalk it up to the previous day’s long run and the fact that there is snow. However, it’s like this all winter and it gets in our heads. I am averaging 30 seconds per mile slower all the time. There’s no way I am going to be ready! I get it, especially in this age of social media where we all see our friends just crushing life.

The truth is, even though the paces may not line up, the effort is still there. I know what many of you are thinking- but you hate using heart rate, power meters, and all that, so aren’t you contradicting yourself? Well, maybe, but I say the same things about those tools as I do GPS. That is that they are tools and they all have a place. Here, I don’t mind any of those, as long as you look at those numbers afterwards to really analyse. In a perfect world, and some of my Boston runners got a little lecture about this with hills, is that I certainly want you to know your paces. However, along with that, I don’t want your workouts to be GPS only. Along with keeping track of that data, one should also internally note how they feel at those paces. How do they feel when not pushing hard enough? Too hard? If we note these things and ACT ON THEM, then we can be pretty close at our desired paces because we know what the effort feels like. Further, when we get in a situation where we aren’t in ideal weather, or doing a workout on a hilly route, we know what the effort feels like. Later on we can correlate what paces lineup so that we know that even though we were 15 seconds slow per mile for that tempo, the right effort was there due to a -10 degree windchill (or whatever factors involved). The key here is to recognize effort to paces in better conditions so we can utilize effort in far less than ideal conditions later.

Ok, so how is performance actually affected by the cold?

How much do these factors all add up to?

It is hard to put exact numbers. If you want ballpark numbers, you can certainly use our calculator that lets you factor in cold and windchill. This isn’t exact by any means, as you can’t put numbers on some of the factors listed, but it let’s you see how much time really can be affected. When we put it together, we also factored in what you were doing, so easy run paces will be affected less than speed work. You can check out the calculator HERE.

Now, some of you are reading this and thinking that ole coach is blowing smoke, so I wanted to use a case study from this past weekend. HCS Coach Mo Hrezi and I have been running together most of the winter here in Rochester. This winter has been brutal, especially the end of December and into January. December was Michigan’s fourth snowiest in history and we had a couple week stretch where we never got above 10 degrees F for the high. That’s air temperature, not including the wind chill. We have been doing a lot of workouts at Stony Creek Metropark where footing wasn’t the greatest and the temps were tough. The long of the short of it is this- say we were doing 3 miles- 2 Miles- 1 Mile at Stony. Under normal circumstances, we’d do these at about half marathon pace. Mo really wanted to break 1:03 at the Houston Half Marathon, so that would be about 4:48 per mile (ballpark). Mo came close to that for 1 mile, where he had good footing and a wind at his back. All the workouts we did in December and early January amounted to one lousy mile run at his actual goal pace.

This was a personal best by nearly two minutes and is the fastest ever run by a Hanson’s ODP member.

The moral of the story is don’t focus only on what the watch is telling you during the winter months. If you keep the faith that you are working hard and putting in the training, that you don’t need to adjust goals (as long as you are racing where weather won’t really be the issue). Take the time throughout the year to know how paces feel and what effort you are putting in to hit those paces. That way, you can have confidence that your fitness is still there and you’ll be ready to fly on race day!

Earlier this year, I did a podcast interview with a guy who pretty much blasted me because I don’t prescribe workouts based on heart rate.…